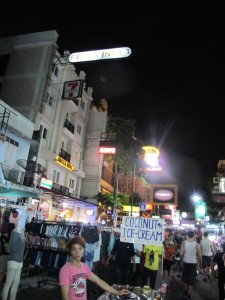 Here I am, arrived in Bangkok and checked in in one of the hotel of Khao San Road !

The Hotel, Rikka Inn…quite expensive one for Thailand, but there is a roof pool! And for this, you’re happy to pay little bit more! 😉 Rooms are clean and nice for the time you’re in…It is very noisy until late at night but come on! You’re on Khao San Road! So, you cannot expect silence here!

So, I will try to be quick because I have to catch up!

Khoa San Road is like I said in my previous post, this is THE road of Bangkok! And you must go there because it’s really a thing! It starts around 7:00 pm I think…and from this time, it’s going crazy until all bars close and even later on…but I was already in bed!

It’s little bit hard to explain…It’s just very busy and there are lots of bars with very loud music and people, more specifically tourists of course who are here to party but specially to drink!

In front of most of the bars, waitresses and waitress (often Lady Boys) solicit people to make them come, sit and drink in their bar, offering “very cheap amazing and strong cocktails” and showing up with T-shirts saying “Here, we don’t check ID!”.

There is also a lots of different to eat, lots of kitchen Tuk-Tuk selling Pad Thai and other Thai meals (Pad Thai is typical Thai meal: fried noodles with chicken, porc or shrimps and vegetables and lots of spices) and there is also the Special Grilled Insects Tuk-Tuk 🙂 and this is funny! You can find from grilled grasshopper, big beautiful and fat cockroaches, worms larva , grilled scorpions and even grilled spiders… 😯 Well…I just took a photo and tasted the worm larva! Not just to die stupid  🙂

When I was in front of this Tuk-tuk, there was that American guy who ate a big grilled scorpion 😕 YUCK! But there were also Thai people who came to buy a small bag of grilled grasshoppers…Well, for sure it is really the touristic thing but it’s pat of Khao San Road.

You can also find a lots of shops selling Thai clothes and more specifically Thai pants or others… There is everything for everybody and all prices!

Then, if you are a man and you’re walking in Khao San Road, you will have offers to have your own suited suit 😀 very special one! So apparently some guys solicit you and show you a catalog, but Oh! How surprising! In fact inside the catalogue it’s completely different thing! You’ve just been ask to attend a Peep show…So I didn’t try it of course but I’ve been said that it is a show where young beautiful Thai girls are making very special exploits…more specifically with their vagina for instance…I’ve been able to have a look on one of the list of these specials show and it was for example vagina bottle opening, or Ping-Pong pussy…among others…well…everything is possible in Bangkok! And I imagine that I didn’t see half of what is possible of course!

You can also have a massage in Khao San Road, at Charlie massage, the one I’ve tested with Anne-Sophie, a French girl I met in Bangkok on my second day there.

Foot massage tested! GREAT! 30 or 45 minutes massage I think, from top of the calf til end of toes…Gorgeous! And we even had a little extra neck and shoulders massage at the end! And I had a man who made massage 😉

This street is very livened up until late at night with really bang bang very loud music, and all the young tourists who are walking around, less and less sober as time goes by 🙂

This is definitely a Must Do in Bangkok!